Your story is mine. I am above no single one. On my path of the Medicine of One all the stories of humanity and individual humanness are mine.

My name is Lomakayu. It means … Everything Finished Well. One night long ago, as a very young man, I gazed up into the night sky. It was as if somehow, laid out in the pattern of the stars, there was a silent message that brought me into the feeling of my purpose for being here on earth. There was no clear message, no mission delineated, no importance bestowed upon me. It was as if an unnamable flame of desire to awaken took ahold of me. From then on, no matter what I did this flame drove it. Whether it was my writing, acting, time in the theater, being a merchant marine, traveling through civil wars in Nicaragua, living alone in a redwood forest, or studying English and Philosophy at UC Berkeley, the flame was there.

The quest had begun. To the onlooker it would not look like the ordinary quest for spiritual truth. My journey had to involve the underbelly of life. In the search for peace I had to swim in chaos. In reaching for the life of truth I had to die in many ways: face to face with the pavement beneath my Austin Healy, on my back with a knife at my throat in Colon, Panama, taking LSD laced with strychnine alone in the woods, and stumbling down the snowy streets of New York City after blowing flaming 151 rum out of my mouth. But the true flame could never die. It refused to be denied its presence.

For many years I also read voraciously from Plato to Sartre to Jean Genet‘s Our Lady of the Flowers, from books about prison escape like Papillon, to Lawrence Durrell’s Alexandria Quartet, which explores experience from different points of view. From Schopenhauer’s The World As Will And Idea to Loren Eisely’s The Immense Journey.

I played the parts of old and young men in pain in the plays of Tennessee Williams, Sam Shepard, and Eugene O’Neil’s Long Day’s Journey Into Night. I had to know the underworld from the inside out and the outside in. I had to know the core that drives suffering. I began studying people through the lens of Transformational Theater and acting. Developing my voice as an instrument of healing and using music and language all gave expression to experiences of the soul and my uniqueness as an instrument to serve the greater good  began to emerge.

My first true knowing of my work here on earth was to be a writer. I wrote from the core because writing was intimately connected with my spiritual growth. Writing eventually gave expression through songs that reflected the work I did with people.

*I should add a footnote here that in 1975 I had a catastrophic auto accident  that rearranged my body and brain. I lay unconscious as the dead beneath a convertible sports car in Southern Utah for i know what how long. I would never be quite the same after this. And I do believe it was this accident that led to my gift of “seeing and Feel” people’s unintegrated history which I late came to call the Soul Journey .

To an onlooker, it may have looked as though I was wandering all over the place. But I was threading a sacred necklace that would become Medicine of One bead by bead as I made my way through  this earthly life. Without knowing it at the time these beads would eventually complete the Circle I would later commit myself to.

So that original flame, ignited beneath a starry sky, carried a silent, unspoken commitment to why I was here which persisted as a kind of undercurrent of destiny. Something within me was gathering skills and experience that would awaken into gifts that were part of my sacred uniqueness. Eventually, it was the ancient land of the Southwest that brought the wisdom of experience and my gifts all together, as the Medicine of One.

Thirty-two years ago I entered the Verde Valley through a gateway of rusty red rhyolite rock above the little mining town of Jerome, Arizona. I moved to that little mining town to dwell in the experience of spaciousness, not knowing then that it was here I would find the seed of the path of the Circle, the Medicine of One. I soon began guiding visitors to ancient sacred dwellings of “those who came before.” I also began guiding people to “Sacred Places” and exploring the energies that “places” have. This was just when the “Vortices” were being mythologized into existence. My own journey evolved into helping others.

“Soul dreaming”, what I also call the Soul Journey, in the shamanic tradition began to emerge at this time. It was if the land, the ancient ones and the sacred places all converged and urged me to do it. Immersing myself in the many Southwest Indian cultures around me began to draw forth and bring together all that I had learned in the 40 years prior to that time.

The study of Buddhism, Hinduism, earth-based cultures and many more joined in a unique way to give birth to my own form of Soul Retrieval and Journeying that was freeing people from their past.

In time, I moved to Old Cottonwood at the foot of Mingus Mountain, just south of Sedona where I now live with my two dogs Beauty and Sundance.

Gradually, the concept of Primordial Movements emerged, which is an intuitive body-based technique for bringing specific emotional moments/movements of the soul into the physical body to move out the unmoved blocks. This happen in real time while working with clients.

The most important development came in 1997 after I branched off on my own and began what would later be known as Medicine of One: A Non-dual Shamanic path heavily grounded in Advaita, all is one. This would empower people to be their own healer through their own basic greater presence that I now call the Big I.

Your story is mine. I am above no single one. On my path of the Medicine of One all the stories of humanity and individual humanness are mine.

I love being. I love the sky and the sun, the river and the mountains, the canyons and the trees. I love red, yellow, black, blue, and the white that holds them all. I love all the animals and I have had many who were my dearest friends precede me in this return home. I loved them, I cared for them, and many of them died in my arms sometimes as my own act of mercy for them. Losing what I love is not easy, but I love being and being in this human form is a wondrous thing. It’s a wondrous thing, but we do lose what we love and there is pain. You might ask, “How do I have a steady ground of peace in spite of loss, pain, and tragedy? How do I touch my infinite eternal self and still lovingly move through this sensuous world and enjoy it? How do I live in two worlds in the same moment?”

The desert scape goes from green to brown and back to green, from bright yellow flowers, to lavender, to white, to … the empty. I, too, must surrender to these seasonal changes, which have a cycle like the movement of the sun: a cycle, which is timely, but in a timeless way. I, too, must surrender to the empty without rushing to fill it. I am speaking of the empty when the feeling of home is shaken apart along with my identity … the empty when my closest, constant companion dies … the empty when I am disappointed in myself … the empty knowing that no one can know my world of experience no matter how precisely I might try to share its detail of feeling, no matter how many times they might smile and nod their head at me. Ah, the empty endlessness of our losses which if fully felt invokes the rain from the sky and transforms the barren winter into living spring. If we can relax and let life move through us, the waves of empty invoke their own fullness. Breathe out fully and breathing in fully is inevitable. This kind of breath is a Circle. 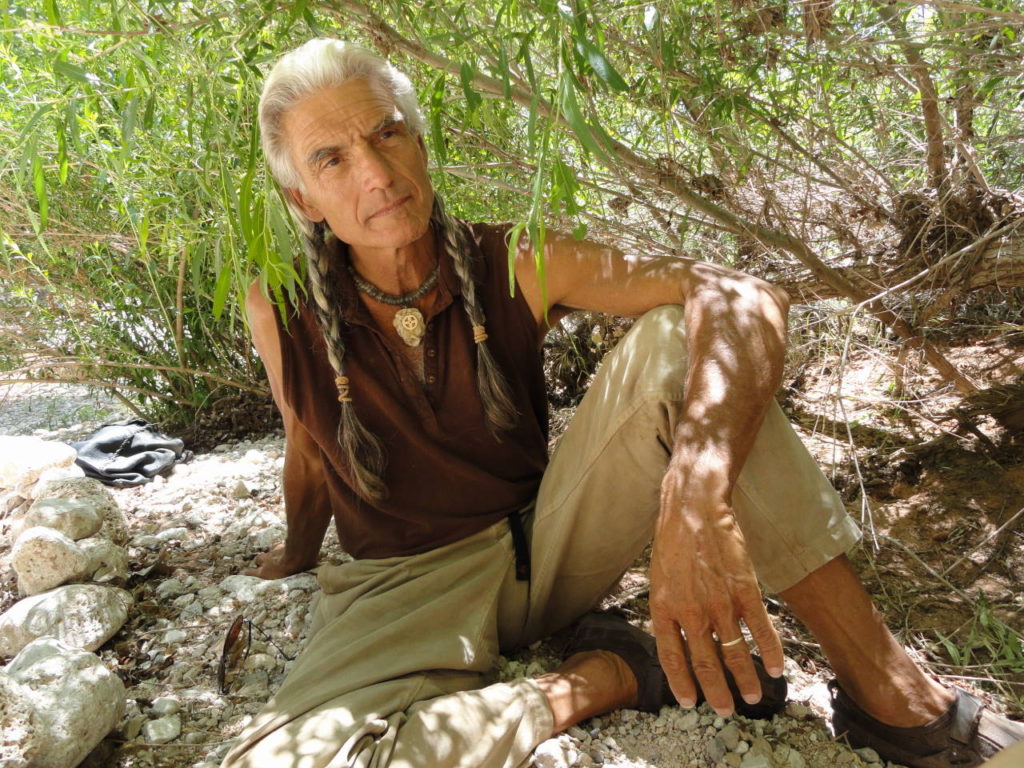 This Circle of breath establishes our own self-compassion to that which moves within us.

Below is the link to a kind of journal of Medicine of One flowing back in time to the late 1990’s. This is my new web site but what is below is “old”. What I say about myself is no match to the truth that you yourself see and feel. If there is a resonance that is what matters far more than what I might say about myself. It is rather how I reach out to you. In my videos and articles you will  “see me”.  Trust that whatever it maybe.  This trust in those who do find their way to me is what allows the magic to happen. This page flows into the past and is also happening right now. I will continue to add to it.

More About Lomakayu and Medicine of One: Evolution of The Soul Journey/ Soul Retrieval