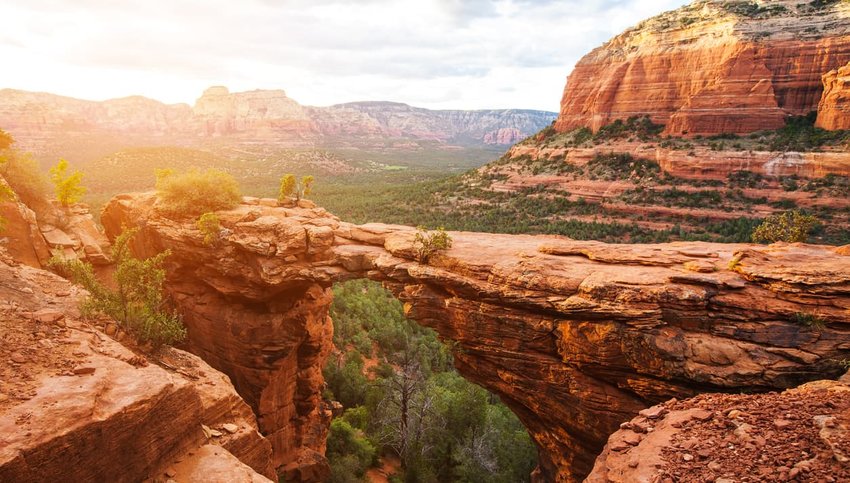 The soul of this place is not to be found in the town. It is in the ancient land that is full of the presence of the Holy Beings. You may think you have come here simply to vacation and discover at some point that something has happened, something magical.

You go back home and two weeks later you are selling your house and moving to a land that has called your soul. You know its not rational. But then the call did not come from your rational mind. Blessed journeys if this should happen to you. 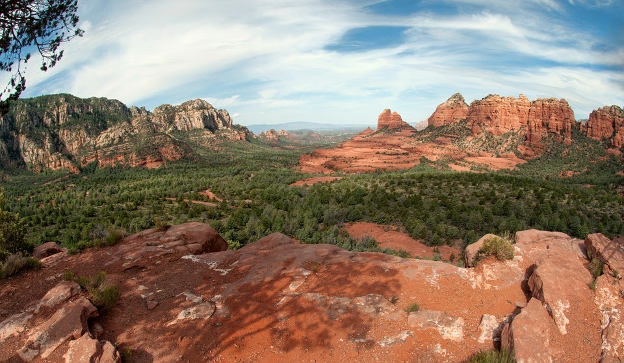 Is it healing? Is it magnetism? Is it electricity? Is it electromagnetism? Is it spiritual? And what is this thing called the web of life? Are all sacred sites vortices? For that matter are all vortices sacred sites? Does it increase our psychic powers or ability to heal? What happens when you build a medicine wheel or other forms of geomancy in one of these spots? What about Native Americans, Indians, and all aboriginal people? Does this word or concept exist in their vocabulary? This is going to be a continuing discussion that I am just beginning. Not as a definitive study or statement or worldwide exploration. More an opinion based on 30 years as a guide and explorer in this open-air cathedral that includes many places all over the southwest and the Verde Valley, where Sedona is located.

I am sure the use of the word vortex has earlier uses in this context than I am aware of. Dick Supten claims to have used it on the radio before Page Bryant wrote her book. Earth Changes Survival Handbook which is the first time the vortices appear in print. This word is also used in this way in the Book The Keys of Enoch published in 1977.
Frankly, I have never cared much for the word as it has a lot of limitations especially when you add on electrical, electromagnetic, and magnetic which are equally limiting.

Dick Supten did go on to write his own book Psychic Energy Vortexes, undoubtedly as a self-promotional device. Apparently he used to gather up to 300 people wearing a white suit and take them into the vortices and teach them psychic powers over the weekend. And I have no doubt there are people that had transformational experiences in spite of all the hoopla ha.
Not my cup of tea. This is one place where you will definitely get my opinion. Does this mean that there is nothing to this vortex phenomenon?

No, it means don’t believe everything you hear and read. Seek out your own experience. And be careful of definitions. There is a mystery here that can not be penetrated by the mind.
Below you will find the four main vortex areas described in Page Bryant’s book. She actually listed 7, perhaps to cover all the main body chakras. Indians Gardens, Apache Leap, and near the present-day post office where the New Hyatt is being built are the three more obscure locations. 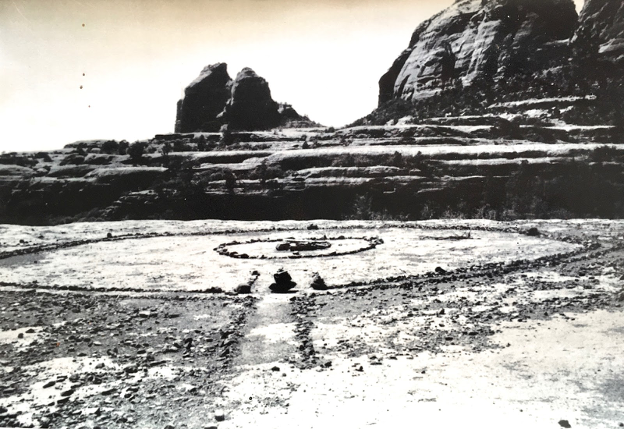 This is the only photo I have of the Schnebly hill Rd. / Bearwallow Canyon medicine wheel. It was originally built during the harmonic convergence in 1987. Until the early 90’s it was much more substantial. The forest service tore it apart. It was later rebuilt the way you see it in the picture. Today it does not exist. Why? The forest service. Personally I feel, as many do, that this is one of the more powerful vortex areas. It is more remote and undisturbed. No highways no airplanes etc

I will tell you right now there are many hot places all over the Verde valley that you will have to go out and discover. But here are the main four publicized / commercialized sites. The photo of Airport Mesa does not show the vortex area. This would be off the Mesa near the upper right corner. Do the airplanes disturb this area? You bet.

Not all vortexes are healthy places. The earth does produce its own noxious energy. Which in some cases was the purpose of geomantic sites, to transform and use the energy? There are actually a couple of these transformational areas out past the West Canyons.

There are three basalt intrusions that form a triangle of power. Several of them have cairns built on them, reinforced with human intention to draw bad energy into it and transform it. One of these intrusions my friend wolfbear is standing on seen in the picture below 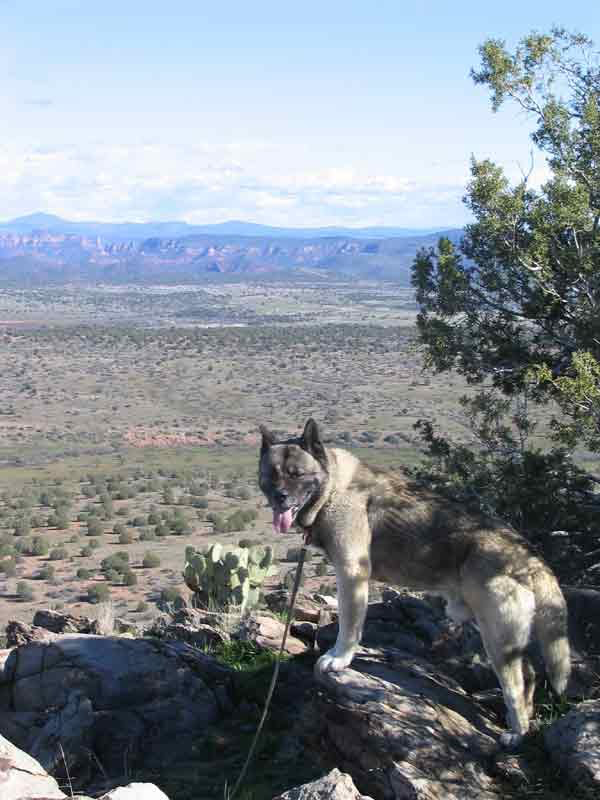 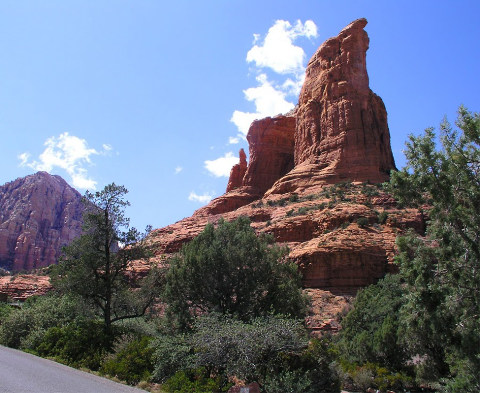 Unfortunately, its name coffee pot rock does not do justice to the power of its presence. If you stand beneath it, it truly feels like a big eagle. It sits on the Northwest side of Thunder Mountain, Capital Butte. 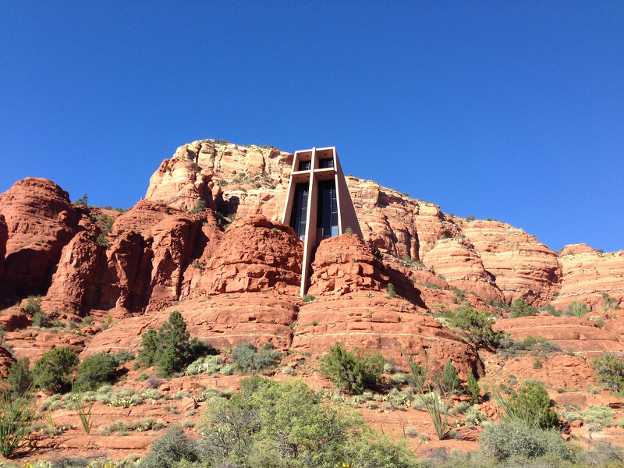 The Chapel of the Holy cross. This is a very powerful site. Back in 1955 nobody was talking about vortexes. But the woman that designed it picked the spot from the area. She had never been in an airplane before. It is a wonderful example of geomancy. 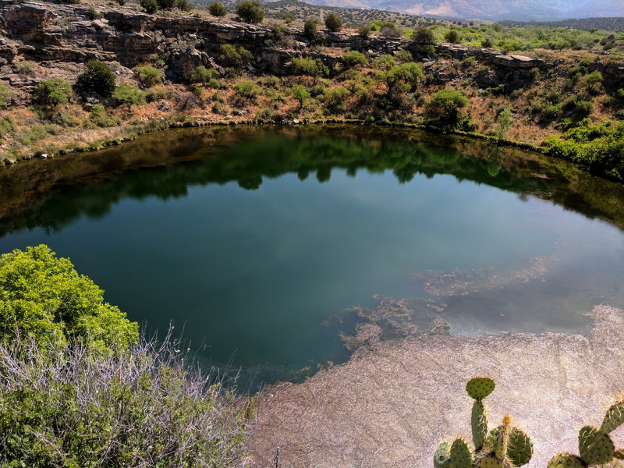 Montezuma’s Well is one of the most sacred places to the local Yavapai and Apache. It is their place of emergence. It is indeed a doorway. 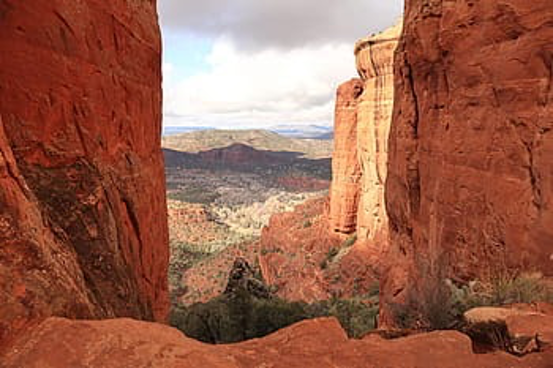 Kachina Woman is at the mouth of Boynton Canyon. This is a good spot. I suggest hiking up to the base of it. Boyton Canyon is one of the busier hiking places and is also the home of Enchantment resort.

Cathedral rock is one of the most popular Vortex areas. In the center, a man and woman stand back to back as a force of balance at the core of this most photographed formation. technically it is a butte. a French word that means mound. As opposed to a mesa which is spanish for table. There is a basalt Vocanicintrusion in the center that makes Cathedral one of the more unique vortices. 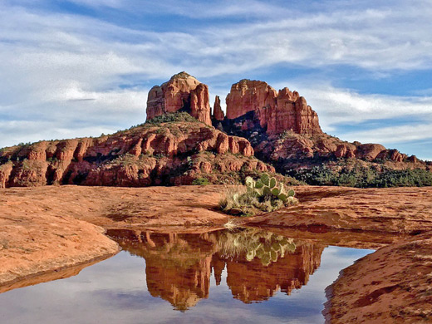 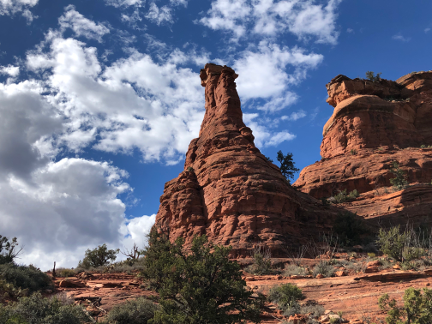 The Hopi believe the clouds are their ancestors. When we get these wonderful summer storm clouds you can see the rain pouring out of the sky, which for the Navajos reminds them of when they use to let their hair down when praying for rain. 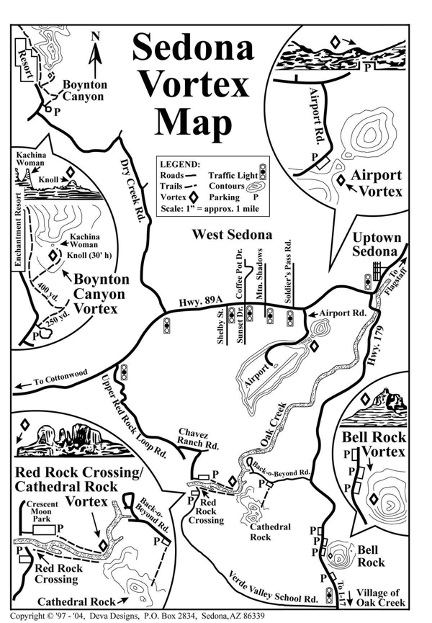 In 1876, the first white settlers arrived in the Verde Valley. By 1902, there were still only 20 families due to the remoteness of the area. In a few years, a postal station was opened by T.C. Schnebly, who began delivering the mail.Ê His wife’s name was Sedona.Ê In her honor he named his new post office, Sedona.Ê In the 1950’s, many artists were drawn by the beauty of the area, included surrealist, Max Ernst. Local artists organized the Cowboy Artists of America in Sedona in 1965.

The settling of Sedona: 1876
The founding of Sedona: 1902
The incorporation date of Sedona is 1988 .
The population of Sedona is approximately 15,500 (1995) and the approximate number of families is 4,658 . As of 2003 the population is well over 20,00 and growing rapidly.
The amount of land area in Sedona is 50.89 sq. kilometers.
Sedona location: 120 miles north of Phoenix
Sedona average annual rainfall is 17.15 (precipitation) inches per year.
The average low temperature is 45.7 degrees F. The average high temperature is 74.4 degrees F.
Sedona elevation is 4,400 feet above sea level.

There are two Sedona landmarks, which were created by men, but destined to be forever associated with the city and area of Sedona.The first is: Chapel of The Holy Cross, a church described as “a spiritual fortress,” “rising like a shrine out of the desert.” It was completed in 1956. The second is:Tlaquepaque, a 4 1/2 acre enclave of authentic-looking colonial Mexican buildings, with nature preserved.The architects built around the sycamores, cypress, and other trees.Tlaquepaque is a center for art, which is art in itself. In December, its “Festival of Lights” celebrates the Christmas Season with candle lit luminaries spaced throughout the area.
When the archeologists discovered Palatki, most of us had never heard of it. When it was vandalized a few years ago, many of us wondered what we had been missing. Palatki is the “archaeological remains of native cultures that have inhabited the Verde Valley for at least the past 6000 years. Found here are cliff dwellings constructed by the Southern Sinagua people, who inhabited the area from about 650 A.D. to around 1300 A.D. Palatki (Hopi for ‘red house’) is home to one of these dwellings, sheltered in a Supai sandstone overhang.” About Palatki tells us more. It is located near us. Time to give our 4-wheel drive truck some action. Here is more information: How to get to Palatki There is even a detailed map. And, please note that every third Sunday there is a special reason for visiting the site. As for those early inhabitants; Where Did They Go?

Sedona has become an artists’ showcase and home for creative effort. Few homes do not exhibit works by one or more artists.The Cowboy Artists became a reality when it was founded over a few beers one night in 1965 in the Oak Creek Tavern of Sedona. Joe Beeler, one of its founders, lives and works in Sedona. It’s rumored he continues to paint and sculpt in his Sedona studio. In 1987, Sedona was no longer a village with modest ambition. It had become a city with a plan for growth. However, along with the growth came problems with traffic, pollution, and sewer management!

In 1995, a sculpture of Sedona, the pioneer, was unveiled and dedicated, to stand in front of the new Sedona Library. Its artist, Susan Kliewer, created the work using Sedona’s granddaughter, Lisa Schnebly Heidinger, as her model.