Even today with our vast scientific knowledge we experience the wonders of roundness with awe as we gaze at the moon, the sun, or the encircling horizon as we stand on a mountain top feeling as if we are at the center of the world.  To the ancients the sun was a perfect sphere made of energy that allowed life to flourish on the earth; it was also the great creator of the known world.  Perfect roundness is a kind of perfection and when viewed in the sky is a great wonder.

Today, off in the distance in a canyon that slices up through the Plateau, a fire is burning.  The smoke billows straight up and is then dragged northwest by the wind.  This fire could destroy homes and lives.  As the sun sets it glows like a phoenix rising from the fire.  How do we move through a life that has pain, death, destruction, and loss?  The answer in the Medicine of One is to be the Circle to all that moves within it. 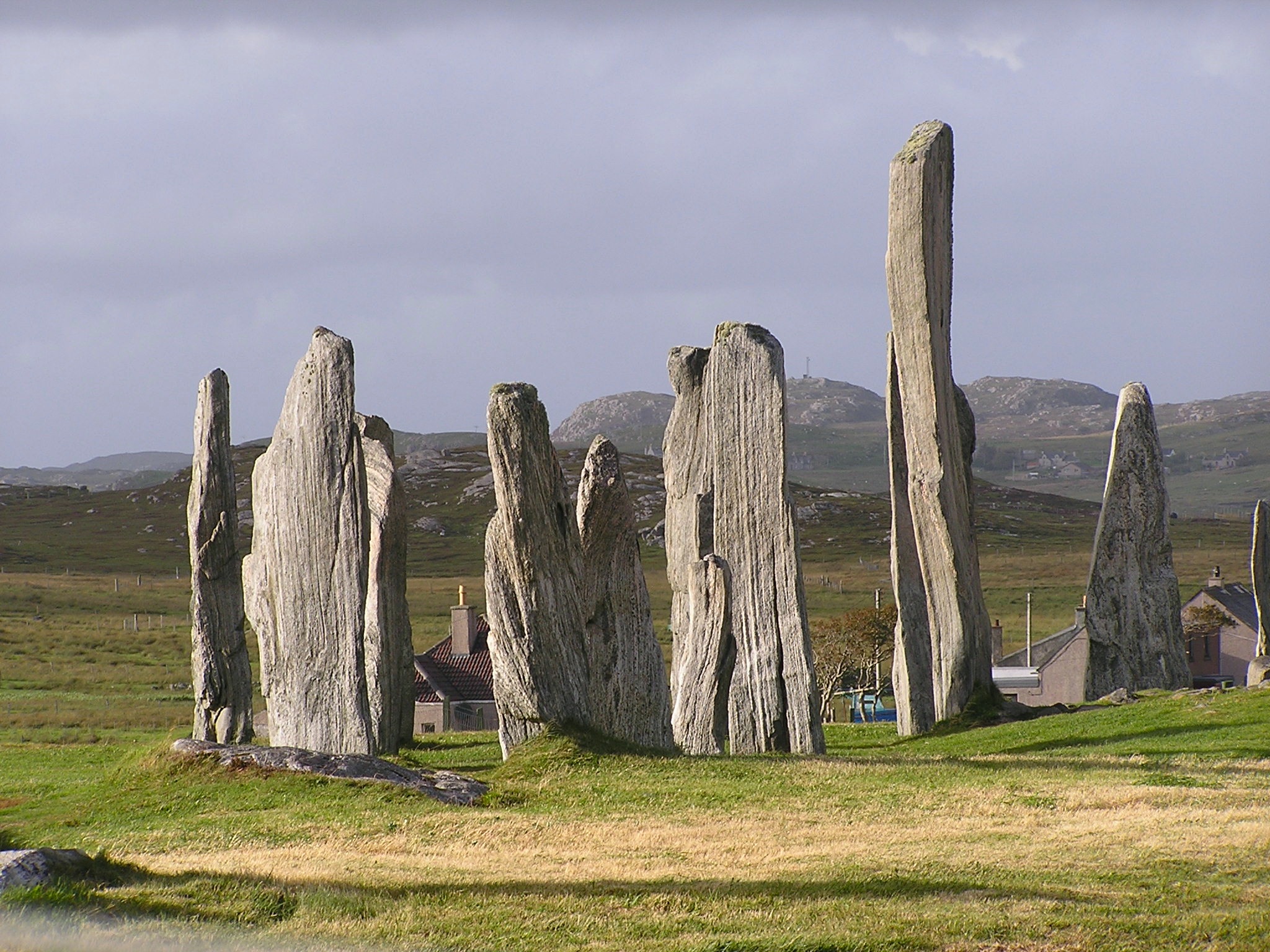 The circle is the feeling of soft, relaxed, spacious breathing, and an unthinking presence, which is like the sky that everything moves in.  Unconditional love and compassion are the essence of you as the Circle.  This Circle can embody all religions in their essence, openness, compassion, and non-judgment.  Quiet, unmoving, unthinking, uninvolved, yet present in everything ~ omnipresent.  God is the Circle.

I build Circles, Circles of stone. My first Circle was built in that rusty red rhyolite that framed my entranceway into the Circle of the Valley below, which would become my home. 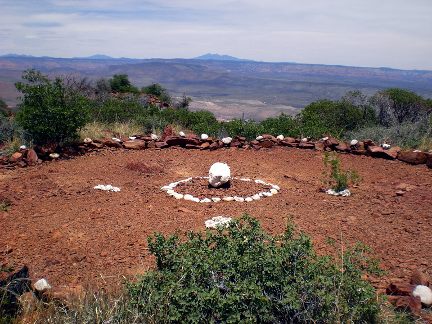 “Circle of Fire” placed in 2 billion-year-old rhyolite and laced with bone rocks from skeleton bone mesa. Connects the with sacred mountains in the far distance, home of the Hopi kachina spirits “the San Francisco peaks

This Circle still looms above the Valley undisturbed.  It’s been there for almost twenty years. In this Circle are bone white rocks brought from an area known as Skeleton Bone.  This Circle is filled with the element of fire, which reaches to the sky above and it needed the anchoring of bone.  Below in the valley, there are many Circles, some are on the Verde River and others on mesas aligning with pyramids in the distance, or sacred buttes.  I walk the land to divine the spot and the place tells me, as I work on it, what form the Circle will take. Sometimes there are formations in the distance I want the Circle to align with, but I never decide the form of the Circle in advance.  They are anchored in the land that anchors them in the earth and the universe and beyond.  They are doorways to the beyond that is you, where there is no inside or outside.  As that doorway, it’s as if some energetic force enters from an invisible world. 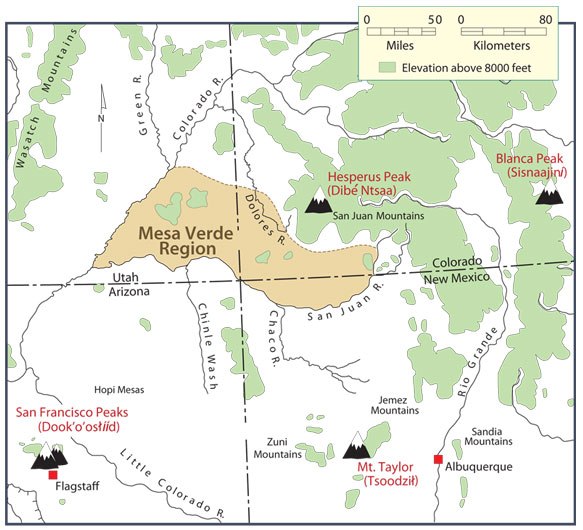 The four sacred mountains of the Navaho universe.

The universe of the Navajo is anchored by the four sacred mountains in each of the four directions. Twelve thousand years ago the Navajo began their migration to this land and anchored that universe in other locations on their way to their present home. Once here in the Southwest they established themselves at what they believed was the center of the world.

My Circles, too, are anchored in the land that surrounds them. 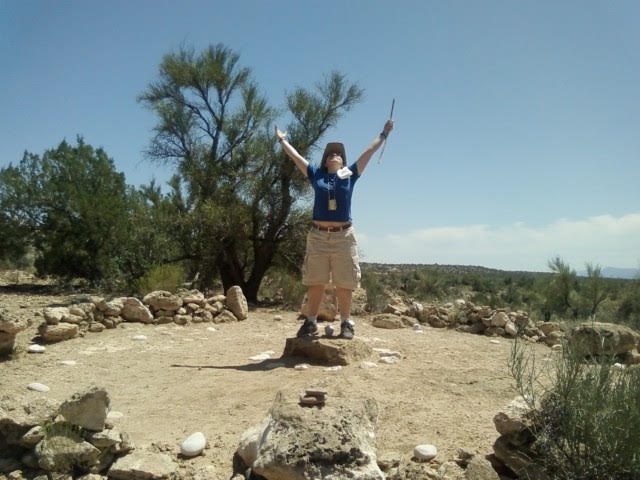 There is a very subtle, powerful energy in these Circles in the desert as if there was something in the ground itself.  It penetrates through your very bones as if you were bathing in an atmosphere of peace, a peace that has a kind of strength.  The body responds by becoming supremely rooted without any effort.  Using Kinesiology muscle testing you can test the body’s change in energy and strength.  As you move closer and closer to the Circle, you become stronger effortlessly.  Only recently I have found that this energy expands outward from the Circle.  I did not orchestrate any of this. It has happened without intent through the exchange between the natural powers of the spot, my quiet presence, and the presence of others.

I sit, I stand, and I lie in these Circles and bring my little i’s world of thinking, worry, and identity and give them all to this Circle, this earth, in a sigh of surrender.

In this sigh of surrender my little i – with the dot of my mind atop the line of my body – unifies and becomes the big I that joins heaven and earth.  I then give this still finite I to the infinite unknown. I surrender my personal quiet to the greater quiet: the infinite east and the infinite west, the infinite south, and the infinite north.  The directions are within me and as a pebble dropped in a pool of water, these Circles within Circles travel beyond time and space to the no-thing.  This happens when you … Be the quiet.  When you think … when thought moves … the Circles fall back in on themselves, to the beginning Circle which is you sitting there thinking.  Thinking is a movement in the Circle of you.  Emotions move, the body moves, thoughts move, but you are the still Circle they move in.  You are the One in which the limitless duality of thought and this world move. 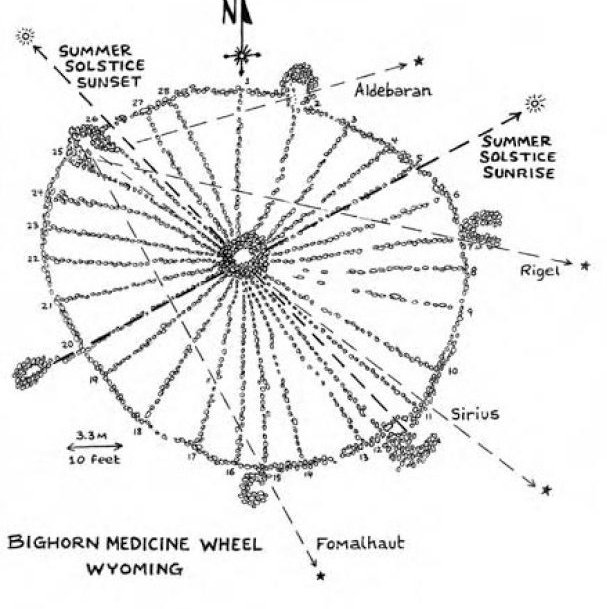 Ultimately the physical Circle is an aid to take you into the Circle of the self, a quiet presence that can be more easily surrendered to here in the quiet vastness than it would be sitting in front of your computer at home.  We get so used to gross forms of stimuli; the quiet medicine of our essence is seldom felt beneath this constant hum of busyness.

A circle drawn on the ground has an obvious center.  The stone Circles, very specifically placed on the land, also have an obvious center.  What does it mean to be this center, to abide in it, to surrender to it?  And where is the true center?  This physical Circle is a simple aid that bestows the experience of centeredness, a kind of tangible kinesthetic sense of place from the visible Circle around you, to landmarks, to the horizon, to the earth, to the solar system, to the universe.  The physical Circle reminds you of who you are and it takes you into the spacious Circle of the horizon and beyond. 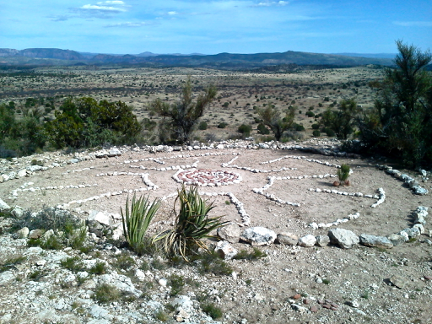 This circle is named after two of my dogs (Cheyenne and Chasta) and is called Shychasta circle. This was its second evolution as it began as a labyrinth seen below.

The center of the Circle is Peace.  You are this peace that the unpeaceful can move within.  When you remember to anchor yourself as the quiet center with a simple sigh of breath, you become the Circle as an act of self-compassion.  When you forget this, the movements of thought, emotion, and body steal your peace.  So, the place to begin is to be the spacious love, the open sky, to these movements.

I use the Circle as a tool, as an idea to lead you into an experience: the experience of your presence as an openhearted awareness that is through you and all around you.  Once in the experience, you must let go of the idea and be the Circle of your true presence. There is no interpreter, and there is no one to intercede on your behalf.  It’s a path to yourself that uses one of the oldest symbols for God – the circle – a circle with a dot in the center.  A dot within a circle is called a circumpunct.  It has been used as a symbol for many things, including the sun, and the solar system.  It is both an ancient symbol for God and for the true self.   When I invoke the Circle and ask you to be the Circle to everything that moves within you, I am asking you to be the all-creator of the solar system of your world and beyond where creation begins.  The dot in the circle can be anything in this life, which moves within this great mystery of God.  But the circled dot is your big I when you live at the center of the Circle of who you are. 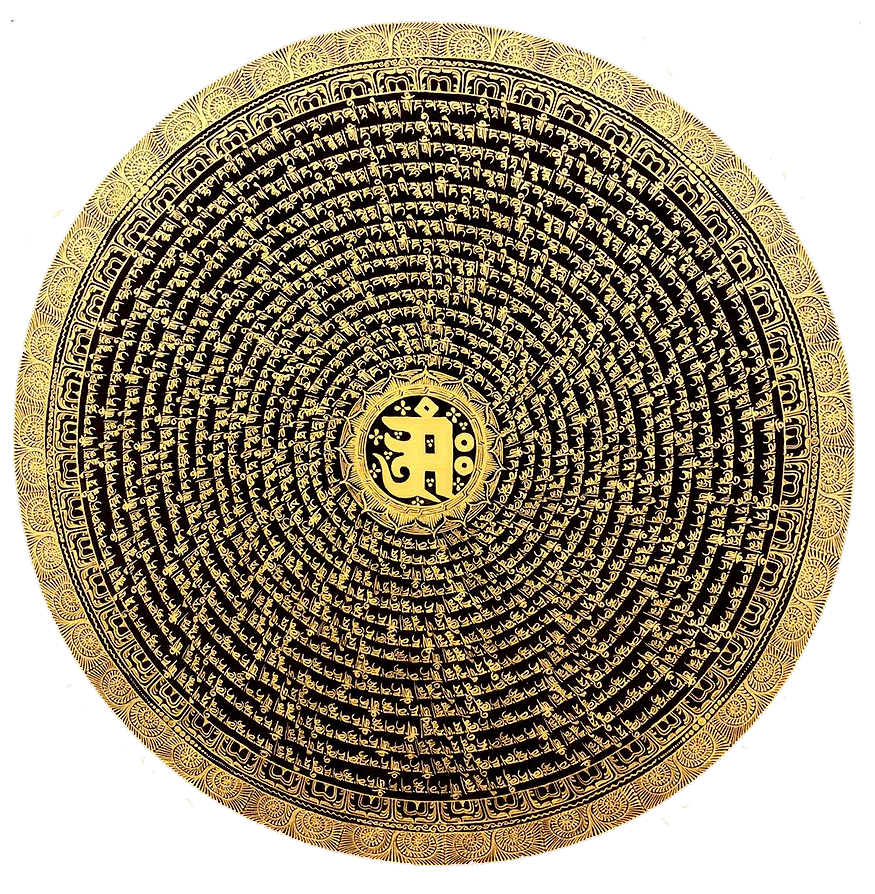 Mandala with mantra and om symbol in traditional Nepali script

Symbols, words, ideas, and concepts are to enlist the aid of the mind.  You must believe that this quiet center is you, this presence that is the closest thing to truth, this experience of quietly being here.  Once you believe it, then it is about giving up time to it.  This has a double meaning.  You must spend some of your daily clock time in and as the Circle of you.  But the journey to the truth of you, of me, of everyone, is something beyond all your history, something timeless.

This Circle as a physical place and a symbol of the Self is a tangible entrance into honoring the power of your own Oneness.